The distinguished Meta4 string quartet's second volume of Saariaho's chamber music was released in 2016. At the heart of this album are two larger works: ...de la Terre (1991) for violin and electronics and Terra Memoria (2006) for string quartet.

The distinguished Meta4 string quartet (Antti Tikkanen, Minna Pensola, Atte Kilpeläinen, Tomas Djupsjöbacka) has recorded two volumes of chamber works for strings for Ondine’s series of Kaija Saariaho’s music: the first one was released in 2013 and the second in late 2016.

At the heart of the second volume are two larger works: …de la Terre (1991) for violin and electronics and Terra Memoria (2006) for string quartet. Originally the third movement of the dance work Maa, …de la Terre involves a fascinating combination of recorded sounds and Pensola’s violin. The impressive Terra Memoria, glowing with earthy colours, is dedicated “for those departed”, who live in the memories that can undergo transformations.

Saariaho’s works typically exist in versions for different ensembles. It may nevertheless appear striking that many works on the recording are versions written for these particular musicians in 2013. Examples include Fleurs de Neige for string quartet, which originates from Neiges (1998) for eight cellos, and Nocturne for viola, originally a violin piece composed in memory of Witold Lutosławski in 1994.

The luxuriously beautiful soprano voice of Pia Freund, a frequent interpreter of Saariaho’s music, is heard in three very different works: Du gick, flög (1982), Die Aussicht (1996) and Changing Light (2002). Die Aussicht, to a text by Friedrich Hölderlin, here in a version for soprano and string quartet, shows Saariaho against a background of German Expressionist music. 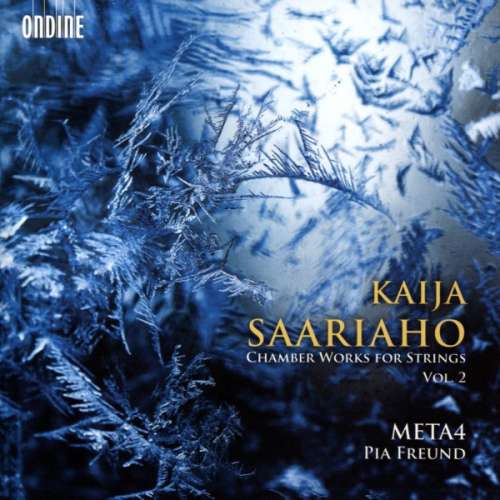