Viitasaari, in central Finland 350 km north of Helsinki, is the home of the Time of Music festival. Founded in 1982, it is Finland’s oldest annual festival of contemporary music. But that is not all: it is also a continuing education event with a legendary reputation. Today, the courses given at the festival attract more top-notch foreign participants than the town can accommodate. Is this Finland’s Darmstadt – or something even better than that?

Courses on composition, improvisation and various annually changing themes are held every year at the Time of Music festival in Viitasaari. This year, for instance, the chamber music course was led by legendary flutist Camilla Hoitenga, while in 2017 the conducting course was taught by Susanna Mälkki. Over the years, the festival’s roster of teachers has included John Cage, Iannis Xenakis, Helmut Lachenmann, Jonathan Harvey, Beat Furrer, Chaya Czernowin – and, this year, Kaija Saariaho.

The last time a Finnish-born teacher taught a composition course here was in 1997, which in itself testifies to how international the educational arm of the festival is. It is this high international level of quality that has kept Viitasaari on the radar of several generations of self-aware Finnish composers in succession as an annual pilgrimage. In the meantime, the number and quality of applicants have risen steadily, and the number of nationalities represented has also increased.

“We never had any actual models,” says festival co-founder, accordionist Timo Kinnunen when I ask him how all this got started. “Well, maybe Darmstadt, but we never talked about it.”

In the early years, shrouded in nostalgia – when the event was more of a summer academy than a festival – the number of course participants at Viitasaari could number up to 100. They ranged from beginners to established professionals; composer Jarmo Sermilä was one of the very first course participants and subsequently succeeded the festival’s first artistic director Jukka Tiensuu. After the first few years, however, the courses were honed to target an attendance of no more than a few dozen professionals – within the constraints of the busy schedules of the headlining composers and performers and the very limited accommodation capacity of the small town.

Even today, there are many more applicants for the courses than there are places available, and the resulting extremely high level of achievement is apparent in the concluding concerts held at the end of the festival week. The participants consider the limited number of people attending to be one of the strong points of the Viitasaari festival. With a small group gathered in a small town in the lovely summer weather, a unique and focused sense of community emerges, with world stars and bashful beginners engaging in conversation quite naturally. 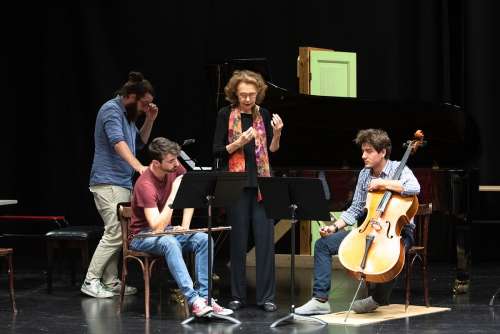 A turning point in life

The Time of Music festival has been a turning point for many. Finnish composer Lotta Wennäkoski received a vital nudge early in her career at the Viitasaari courses in the early 1990s. She was a fledgling music theory student at the time and had the idea of attending an improvisation course with a former schoolmate, Riikka Talvitie, who played the oboe. They listened to all the festival concerts and went to the sauna every night with the festival people, like one big happy family. They were impressed by the sincere enthusiasm and inclusive attitude of the contemporary music crowd. Today, they both are full-time professional composers.

I myself first visited the festival at the age of 19. Having completed my military service, I was phoning through my friends from upper secondary school to find out what was going on in the summer. I received a particularly excited invitation to come to Viitasaari for some “good crazy stuff” – and to bring a tent. Although I had discovered contemporary music and begun to compose music some years earlier, and although I had listened to concerts from the Time of Music festival on the radio, it was not until I actually went there that I discovered a real, tangible community that shared my enthusiasm.

I sneaked in to listen to some of the courses alongside the concerts, and I even received an ex tempore demonstration of multiphonics on the oboe. I went to the sauna with my future colleagues, well into the small hours; in the following spring, I applied to study composition at the Sibelius Academy. In 2004 and 2005, I attended my first composition masterclasses at Viitasaari (with Bent Sørensen and Jonathan Harvey). This became a routine for me and led me to explore many equivalent events abroad, from Darmstadt to IRCAM.

So how have this year’s students, representing nearly two dozen nationalities, found their way to a contemporary music course in Finland, basically in the middle of nowhere?

Three major pathways emerge: either a course was recommended by the student’s own teacher who had been to Viitasaari, or the student read about it in social media, or else the student saw an ad in the Ulysses Network, a European contemporary music training portal of which the Time of Music is the northernmost festival member.

Spanish composer Jaime Belmonte (b. 1988), who has been living and studying in Finland since 2011, visited Viitasaari for the first time this year – “finally,” as he himself says. He notes that he had repeatedly been told that Viitasaari is “THE contemporary music festival that you should attend in Finland.” Now that Kaija Saariaho, who rarely teaches, was giving a course, it was high time to stay in Finland for the summer and go see what all the fuss is about. Belmonte considers the Time of Music to be one of the best summer festivals in the world for a young composer, particularly because of the intimate atmosphere of the courses.

“It did feel like it lasted for two weeks at least, or even more, since the program was so huge,” enthuses Georgian-born Neli Pantsulaia (b. 1993), a student of composition at the Copenhagen Royal Academy of Music who had never taken an improvisation course before. Though she was initially unsure, the course leader, John Butcher, quickly put her at her ease and made her comfortable with making quick decisions as part of a group. 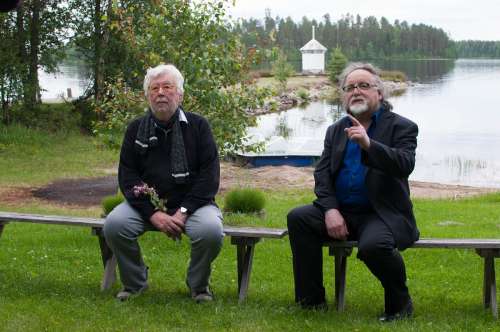 The concluding concert of that improvisation course was an electrifying display of interactive chemistry that composition course attendee Katharina Roth (b. 1990) a bit surprisingly named as her favourite festival experience. Roth is from Germany and studies composition and music therapy in Linz. She had long admired Saariaho, whom she met for the first time at Viitasaari. She also enjoyed working with the Uusinta Ensemble on the world premiere of her new work.

Course attendees voiced the greatest praise for the teachers, the festival atmosphere and the high-class performances, particularly the dramatised performance of Saariaho’s violin concerto Graal Théâtre.

“I really enjoyed how thoughtful each concert was,” says Australian-Hungarian flautist and composer Phoebe Bognár (b. 1997). For her, the major difficulty with the Time of Music was deciding for which of the three interesting courses to apply.

Although the courses at the Time of Music festival offered inspiring encounters, important advice and provocations, I feel that it has been the concerts that have made the greatest impact on me. I have heard an incredibly wide range of live performances, from young, rebellious eastern Europeans to rising world-class stars and prominent ensembles – and world premieres, too, the most vivid facet of the experience. I realised that new things are happening all the time and that all new developments are being passionately discussed. I stopped needing to bring a tent a long time ago; instead, I began pooling resources with fellow students to rent a house for the duration of the festival.

I have subsequently been to the festival regularly, in 16 summers – under three artistic directors – as a composer, lecturer, moderator and writer of programme notes. Over the years, I have been privileged to see how international the courses have become and particularly how massive productions and legendary composers have materialised in the remote Finnish lake district thanks to the current artistic director Johan Tallgren: Harry Partch instruments large as a tractor, incredible ensembles like Ensemble Modern and the Arditti Quartet, and immersive productions created by the young international New Discipline generation (e.g. Jennifer Walshe and Alexander Schubert, who provided a world premiere this summer) – and of course the memorable meeting between guest composers Brian Ferneyhough and Harrison Birtwistle on the shore of Lake Keitele in 2015.

Viitasaari has become a noteworthy contemporary music event whose repertoire, surrounding lakeland, long daylight hours and sauna culture seem to be the envy even of great international names. 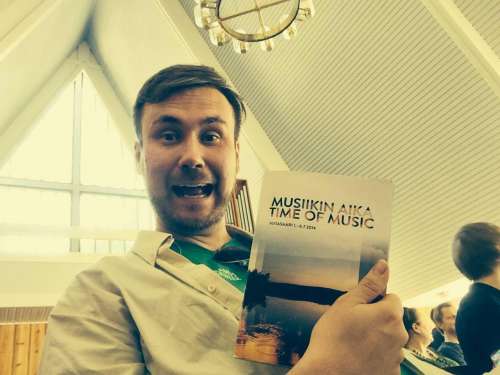 The author of this article, composer Jarkko Hartikainen, has been visiting Viitasaari since he was 19 years old. This photo was taken in 2014 by a fellow composer Antti Auvinen.