“The music of Arctic Fire concert at the WOMEX 2019 was brave and contemporary, yet all of them drew in some way on archaic traditions in Finnish music.”

The opening concert of WOMEX, the World Music Expo, is usually a showcase of the music scene in the host country, often showing off the best-known artists. In this case, Finland made a characteristically bold statement. Instead of showcasing established names, it was young, new generation artists being promoted.

Two of the groups have only recently released debut albums and the remaining artists have been on the scene for less than a decade. The music of Arctic Fire (Pohjoiset tulet) was brave and contemporary, yet all of them drew in some way on archaic traditions in Finnish music.

Vildá is a duo of Sámi singer Hildá Länsman and accordionist Viivi Maria Saarenkylä, who met at the Sibelius Academy. Länsman is a force of nature and her voice has an elemental quality that seems to come from the earth itself – at its most dramatic it sounded raw and untameable, although occasionally this was weakened by too much reverb. She wielded a Sámi drum almost as big as she was, and around the deep, insistent throbbing of the drum, Saarenkylä weaved lithe and nimble figurations. Saarenkylä was Finland’s accordionist of the year in 2018, which is saying something. 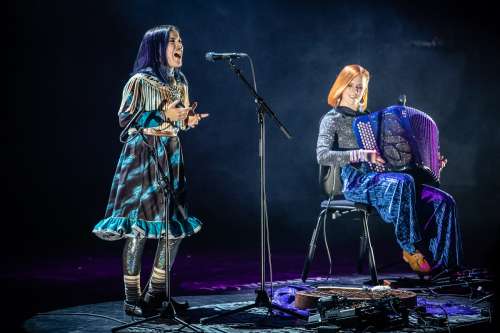 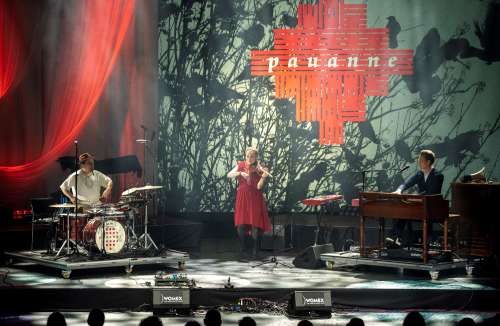 Vildá’s opening song was a memory of the traditional Sámi occupation of reindeer herding, which Länsman was born into. “How strong the rumble feels when hundreds of reindeer are gathered in a single herd,” she sings, the drum articulating the thunder of the hooves. But there was a lot more than nostalgia for the tradition. Another song, “Utsjoki-disko”, is about a night out in the northern Sámi town, with a jumble of languages.  Länsman’s outfit looked like a contemporary re-interpretation of a Sámi tunic and worked as a visual metaphor for the music.

Pauanne are named after the pagan god of Thunder. The trio featuring violin (Kukka Lehto), drums (Janne Haavisto) and Hammond organ and electronics (Tero Pennanen) are interested in old folk beliefs that are surprisingly similar to some we have today. This is most memorably illustrated by an old folk poem about building a protective wall, juxtaposed with the words of Donald Trump. They also incorporate archive recordings into their soundscape, although wisely leave space in their structures for the musicians to go wild from time to time in a frenetic outburst on violin and drum, for instance. Humour was a recurring ingredient in the show, as Pennanen tried to get the largely non-Finnish audience singing along to nonsense, rumpy pumpy lyrics as a man’s sweetheart gets run over by a train. This seemed quite surreal, but it wasn’t the only time in this show. 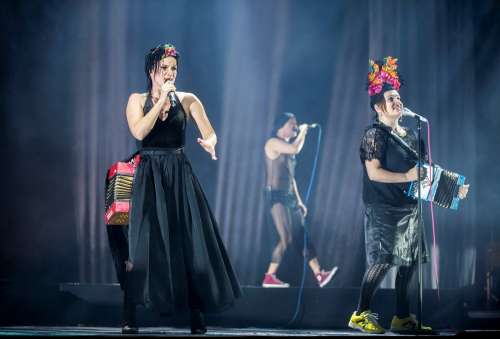 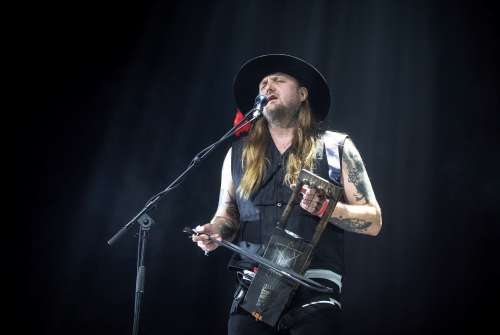 Pekko Käppi is a performer I’ve seen and admired a number of times before. His chosen instrument is the jouhikko, an archaic bowed lyre which has had quite a revival in recent years. It’s a challenging instrument, both for the player and audience. It’s pretty scratchy at the best of times, but Käppi’s approach is extreme, distorting the sound still further and playing it at an extremely high volume. In her opening speech, Science and Culture Minister Hanna Kosonen mentioned that Finland has more heavy metal bands than any other country in the world. Here Pekko Käppi seemed to be firmly placing himself amongst them. The lyrics of his songs are apparently traditional while the soundworld is anything but, although it’s tricky for non-Finnish speakers not to feel that they’re missing something.

The – also surreal – finale was Suistamon Sähkö, which features a pair of musicians (Anne-Mari Kivimäki on accordion and the ubiquitous Eero Grundström on electronics) and a pair of dancer-singers. Reetta-Kaisa Iles is the only dancer I’ve seen wearing an accordion on her waist as a fashion accessory while Tuomas Juntunen looked like he was fresh out of the sauna with little more than bathing trunks. Suistamo is a village in eastern Karelia, which was seized by the Russians in the Winter War of 1939–40 and has become an obsession for Kivimäki. The tunes she’s arranged have an infectious swing, laced with subversive humour. We get another round of rin tin titta lyrics and then the surprisingly catchy Suistamon Sähkö song. It sent the audience into the night super-charged with electricity.

The whole show was fast moving, varied and brave, words which are an apt description the Finnish contemporary folk scene as a whole. There’s a clear respect for tradition, but nobody is oppressed by it.

Watch the Opening Show of Womex on Yle Areena: