"The JuuriJuhla-RotFest (Roots Festival) takes place in Espoo each year and says it has its own roots in the pelimanni folk dance music, although most of the concerts range much wider. It featured top names on the Finnish roots music scene."

The JuuriJuhla-RotFest (Roots Festival) takes place in Espoo each year and says it has its own roots in the pelimanni folk dance music, although most of the concerts range much wider. It featured top names on the Finnish roots music scene, including Pekko Käppi and Kimmo Pohjonen.

Going right back to the roots was the concert of Aspö Spelmän and Maria Kalaniemi & Pekka Pentikäinen (April 7) playing music from two islands in the archipelago off the southwest coast of Finland.

From the tiny island of Aspö were father and son Tore and Johan Johansson from what is clearly a very musical family. Their repertoire was waltzes, polkas and the occasional schottische played, mainly in unison, on a pair of matching Giulietti piano accordions. The only thing missing was dancers! We got a chance to see them and other musicians on the island in a short documentary about this island with a population that expands to 30 inhabitants in the summer - and about half of them playing music. A voyage of discovery.

The theme was continued by accordionists Maria Kalaniemi and Pekka Pentikäinen playing music by Anna Danielsson from Brunskär, a larger island in the archipelago. Again they were dance tunes, with a stand-out minuet with harmonising melodies on the two accordions. It was charming and very beautiful. Maria Kalaniemi, who came out of the first year of the Folk Music Department of the Sibelius Academy, is well known for her own projects and duo with Eero Grundström and it was great to see her exploring the tradition like this.

Pekko Käppi performed solo and and with Tommi Laine on guitar and Nuutti Vapaavuori on bass (April 9). The songs with K:H:H:L came from their album to be released later this year. The guitars and harmony vocals soften the strident, angular nature of Käppi’s bowed jouhikko and take it towards an American country sound, if that doesn’t sound too absurd. A song about a strange and scary encounter with whales is a single to be released next week. “When strange times are going on and it seems like the end of the world, no one should be alone,” said Käppi, explaining what it was about. Clearly a song for our times.

The trio with guitars might be more friendly on the ear, but even without understanding the lyrics, I found his solo voice and jouhikko songs more compelling. The jouhikko is such an unpromising instrument - a slice of wood with three scratchy strings - that I admire Käppi for making so much of it. Lyrical and scratchy, rhythmic and scratchy and just scratchy, with lyrics sweetly or playfully sung that I didn’t need to understand. Käppi himself said of the instrument: “I think it’s something that moves you, but I don’t mean dancing or moving energy.” It’s about emotion. The sounds and textures were intimate and powerful. They took me back to the deep, raw, runo sources of Finnish culture. With his long flowing hair and bare feet, Käppi looks like an ancestral character straight out of the forest and this digital stream seemed like a wonderful kind of time travel. 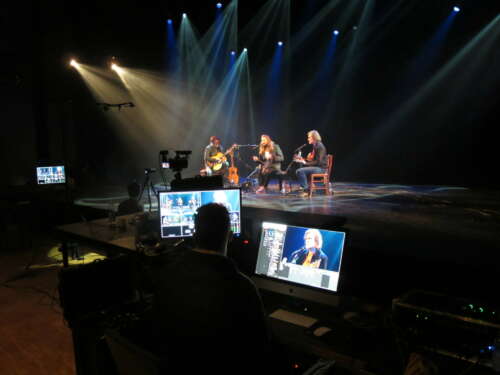 The final evening (April 10) featured the bluesy harmony singing of Juurakko. The five-piece female band sing African American-inspired vocals in Finnish accompanied by an intriguing range of instruments. The musicians were Maija Kauhanen, Eija Kankaanranta, Minsku Tammela, Anna Wiksten and Kaisa Saarikorpi, while the instruments included harmonium, kantele (often bowed), jouhikko (again), cigar-box guitar and suitcase. They are entertaining and talented, but what they really needed was a responsive live audience.

The closing performance had Kimmo Pohjonen taking us into his UZone, from which there’s little chance of return. With Pohjonen, you often wonder what he’s got against accordions. He wrestles with them, destroys them, and now seems to be genetically modifying them. He’s recently developed a new instrument where he can play six different layers simultaneously plus vocals. He can also somehow control the visuals.

Always with Pohjonen you get a show. He’s dressed like some sort of shaman, illuminated in chiaroscuro light with projections or light design behind. His accordion sounds like a balafon, a drum kit, a cinema organ and at the beginning there are even some rather jaunty tunes. He’s always moving, as if the accordion has a life of its own. I suspect it does and in lockdown he’s created it like some sort of Frankenstein’s monster which is seeking revenge. The whole effect is like an apocalyptic struggle with the instrument, moments of love and hate, and a couple of beautiful moments of hymn-like tenderness. It seems such a long journey from the accordion waltzes of the Aspö Spelmän to this diabolic accordion extravaganza.

JuuriJuhla-RotFest laid on quite a feast. The music builds to a spectacular finish, as Pohjonen gets sweatier and more frenetic before he’s plunged into darkness. But he could have gone all out and programmed some tumultuous applause into his instrument for the end!

You can buy tickets until April 16 to watch Kimmo Pohjonen's and Pekko Käppi's concerts here.